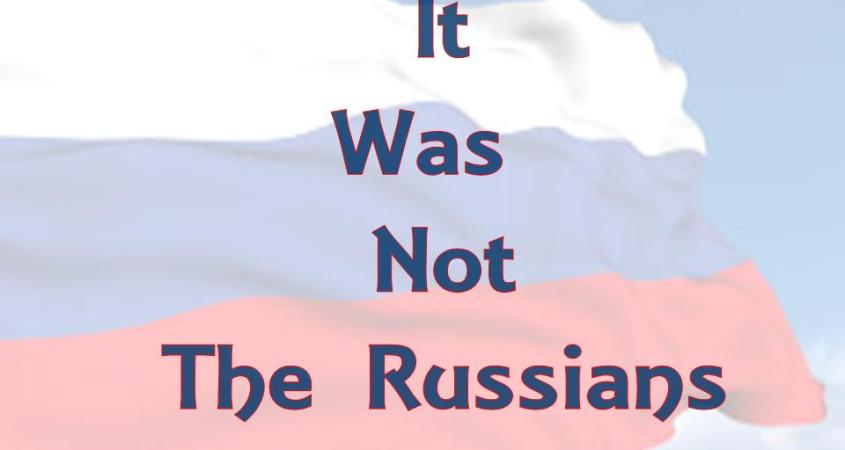 It’s weeks before you are about to make one of the biggest decisions in your life, your wedding. You are nervous, scared, excited and ready to seal the deal! You go out to your mailbox and find an anonymous letter with a zip drive inside. The letter reads “enclosed is the truth, you need to know the truth before you make your choice.” Puzzled and curious, you go inside and insert the zip drive into your lap top. Your mouth drops open….no, this can’t be true….you are watching your fiance totally making-out with someone else! What the hell right!? Wow! To be sure this is current you observe the footage-your fiance is wearing the coat you bought them just a few weeks back. Omg! Your heart breaks, you feel angry, frustrated, betrayed…….

Today, James Comey, the Director of the FBI….yes, the guy that said Hillary did nothing wrong by destroying subpoenaed evidence, yep that guy-well he has now agreed with the CIA that the Russians were involved in helping Trump win the election.

First off, I still don’t buy it. I think this whole thing is a way to de-legitimize Trump’s win. The Guy crushed it with the Electoral college and when you win the Electoral college YOU WIN the Election. There is a process in play to de-legitimize the President-Elect -we’ve witnessed a series of events. First we witnessed rioting in the streets. Millennials couldn’t cope, they needed blankets and cocoa and play-doh to work through Trump’s traumatizing win. Second we saw the desperate need for recounts. With every re-count that took place Trump gained MORE votes! The next move was to go after the Electors in the Electoral College. Threaten their lives, get Hollywood to put out a desperate plea about voting ones conscience and how important the Constitution is (yes, the Constitution that Obama stomped all over the last eight years). And Now it’s the Russians! The Russians did it! It’s their fault Hillary lost!

But you see…..WE Deplorables aren’t that stupid!!! Even if the Russians were involved….We are SMART enough to KNOW where to direct our anger and it’s not at the Russians! Truth was exposed. Truth. All the Russians did (IF they did anything) was expose the truth. The dark, ugly, emails of the DNC and John Podesta that enlightened us to what REALLY IS GOING ON! Wikileaks has NEVER been wrong, ever. So it’s a reliable source…..I mean most newspapers and networks have to apologize several times throughout the year for incorrect facts or mishaps in reporting- not Wikileaks- it’s always has been accurate and factual in exposing the truth, and has actually fulfilled the sorely lacking role of “Investigative Journalist.”

The media and the current Administration want us to be MAD at the Russians! How dare they!? Ughhhhh! They also want us to think that Trump’s win was not rightfully won, oh but it was. It was more rightly won than ever, because voters showed up to the polls more informed with the truth than ever before. Americans saw the dark demons that were desperately trying to be shoved back into the closet….but it was too late….we saw them.

We now know truth. Once you know the truth your can’t go back. You can only go forward and that’s what Americans did…..they wanted to clean house and yes, Drain the Swamp.

No. It wasn’t the Russians that caused Hillary to lose.

It was informed Middle Class hard working Americans that caused Hillary to lose.

We showed up to the polls and we were armed with the truth.

One thought on “It was not the Russians”