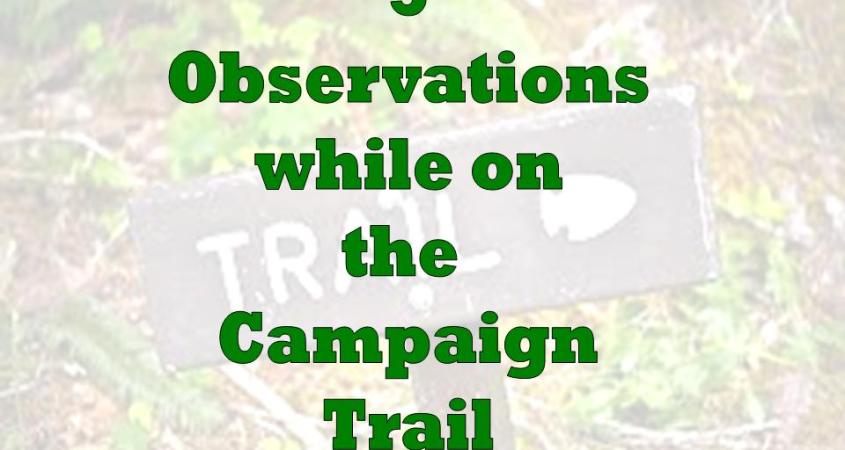 This particular blog is geared more towards the “political junky” types. Those who get up in the morning like me, and read whatever political article you can get your hands on. I think reflection is something that is really important to do at the close of a year. Personal reflection is key in order to press yourself to grow into the person you were called to be. I also think reflecting on what has been learned over the course of the past year enables one to not make the same mistakes over again. I was part of two campaigns this last year. I served as the Communications Director in a US Senate Race that was lost in the Primary, and was also a state CO Chair for Donald Trump’s Presidential campaign, focusing on millennials and women.

This year I learned a ton. I learned what to do again and what to NOT do ever again. Countless reflecting and numerous observations have been made, but for the sake of time I have narrowed my observations down to FIVE. The obvious observation, which could go without noting is that a National race is totally different than a Primary Race and the people that vote in General Elections often don’t vote in Primaries. The ultimate goal though is to WIN the General. I am learning how to win, and I love the strategy involved in winning. So, here’s what I learned this last year:

1.  The “most Conservative” is overplayed and it won’t win a General Election.

My biggest observation while serving on the US Senate race was the candidate that throws out the most “Conservative red meat” will most likely win the Primary, but they have little shot in a General Election. Primary voters are your engaged politicos. They hob nob with one another. They attend the same banquets, dinners, fund raisers and party events. They all know each other and they all know who will be tapped next among them to run for office. These “politcos” though are generally out of touch with the vast majority of the population. Unfortunately Primary voters don’t take into account a candidate’s ability to fund-raise, debate, or their personal background in fixing the messes we witness in government. Fancy one liners & slogans appeal to the base, but not the general public. Though the Primary voting base would be considered your “more informed” voter, they are not informed on repairing the complete train wreck we have in government. If so, qualifications in fixing the mess would be of utmost importance. What qualifies someone to hold office? Holding titles or actual real tangible success in the private sector?

2. The winner in a Primary often has to walk back what they professed in the Primary, but this doesn’t work anymore.

As mentioned above, lots of one liners and Conservative “red meat” verbiage is spewed to entice the Primary voting base. This stuff doesn’t fly in a General. For example, a candidate who won a Primary race in the last election cycle but did not win in the General is quoted saying “no background checks for anyone” in regards to gun laws, later they tried to reword this statement, but it had already been said. Now to your hard line Conservative, “no background checks” resonates to some, but your Independent voter finds this statement asinine. With trackers (opponent operatives), cell phones that can capture anything and social media everything said IS CAPTURED,  a walk back is shooting yourself in the foot. Consistency is key, if you are not consistent you lose trust. No trust, no vote. Want to win, stay consistent from start to finish with messaging, no pandering.

3. DC strategists are totally overrated in a State Wide Race and a complete waste of money.

Yes, strategists are needed in a National Presidential Campaign, but I have found they are useless in state races. Why? They have no idea what is happening on the ground and they are making calls they have no business making. Many strategists live in DC, completely disconnected from what is happening in each state (similar to most politicians). What worked in one state does not work in another. The voting base in each state is unique and must be catered to on a unique level. Strategists are important, but my advisement to a win, is to get counsel from one LIVING in the state that the race is taking place in.

4. Endorsements mean everything and nothing.

This one is totally finicky because in this past Presidential Race, Trump had little to NO endorsements and everyone and their mom was endorsing Hillary. Trump literally broke all the rules with this one. The vast majority of Americans didn’t care about endorsements AT ALL in this Presidential Election cycle. It was the world vs Trump and Trump won.

On a state level, in a Primary, YES endorsements mean so much!  I learned that those who endorse candidates often NEVER meet the candidate they are endorsing. Endorsements are more of a you scratch my back I’ll scratch your back agreement, basically -another form of lobbying. Endorsements from within the state, don’t hold near as much weight as endorsements from a Nationally known individual. This whole endorsements element reminds me of Hollywood, where I lived for years. You can get the A list actor, or the B list actor- same with endorsements in the political world. It doesn’t matter if you have people who have known you for 30 years and can testify to your character, if your opponent gets a big “political star” name, you’re outta luck. Want to win, get big name backing.

5. There IS a Silent Majority and they are smarter than you think.

There is a Silent Majority and they were awakened this past election cycle, the question is will they stay awake? The vast majority of the American people are DONE with politicians. They desire someone that has succeeded in the private sector. It’s one thing to state where you stand on policy issues pertaining to job creation, but it’s whole other thing to actually have created jobs. It’s one thing to be a small business owner, it’s a whole other thing to be an employer to many individuals who depend on you for their livelihood. Though a great speaker, Obama’s Community Organizing and One Term Senate experience revealed how little he knew about fixing anything and we the people suffered from this over the course of the last eight years. If Trump succeeds, the bar will be raised. His private sector success will be testimony that we need more people in government with private sector success.The credentials of “career politician” may be a thing of the past. For this, we must wait and see……

3 thoughts on “5 observations while on the campaign trail.”