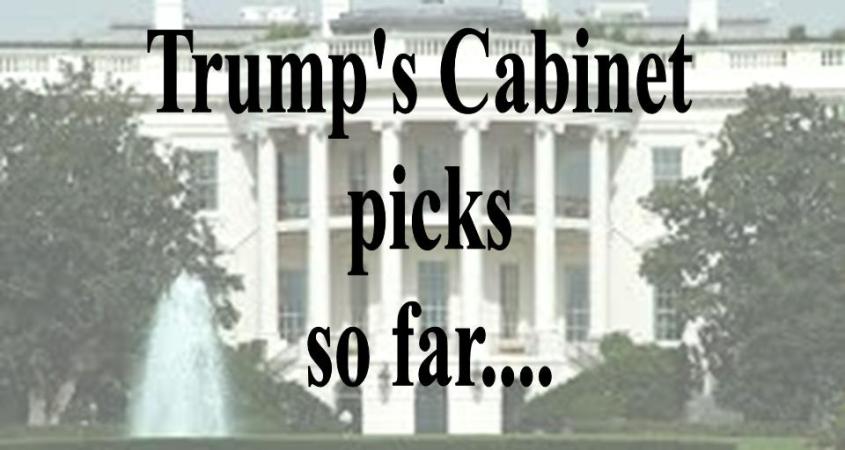 We have heard a lot of names discussed, but who has made the cut? Below is a list of Trump’s Cabinet picks so far:

Counselor to the President: Steve Bannon

Bannon age 63, born in Norfolk Virginia to an Irish Catholic Democrat family is set to be the chief counselor to President Trump. He holds degrees from Harvard, Georgetown, and Virginia Tech. Bannon has been an officer in the Navy, Investment Banker, Producer and one of the founding members of Conservative News Media Outlet- Breitbart News. Liberals are calling Bannon an “alt right” Anti Semite, because they think Breitbart News has published anti-sematic commentary, which is just ridiculous! So ridiculous that Jewish Democrat Alan Dershowitz, is defending Bannon- you can read that here.

Reince is the Chairman of the Republican Party who has now been tapped as Trump’s Chief of Staff. He is 44 years old, a lawyer from New Jersey. Many complained that Preibus was picked because he’s “Establishment.” I see it differently. When the Establishment slammed Trump, refused to stand with him-like Bush and Kasich who refused to keep their promise in supporting the Republican Nominee- Preibus backed Trump. He was loyal to Trump and loyalty speaks volumes in D.C. If Preibus doesn’t stay loyal- we’ll see a “you’re fired.”

James N. Mattis, is 66 years old from Pulman, WA. He is a retired four star United States Marine Corps general. He last served as the 11th commander of United States Central Command from August 11, 2010 to March 22, 2013. Mattis has served in the Gulf war, Afghanistan, the 2003 Invasion of Iraq and the 1st and 2nd battles in Fallujah. Mattis has repeatedly criticized the current administration’s total lack of strategy in the Middle East. Huh….makes sense to me. To every radical terrorist out there, Mattis is your worst nightmare!

Jeff Sessions, the strong Constitutional Conservative Senator from Alabama was one of the first, if not the first to throw his weight behind Trump. The 69 year old was Attorney General of Alabama,  and has held his Senate seat since 1997.

Like always, the Left is calling Sessions a racist…..because that’s what they do. 30 years ago, Sessions was accused of calling an African American, who was an assistant to Sessions while he was Attorney General, “boy” numerous times. The accuser also said that Sessions said the KKK was “okay.” If this is true, it’s not okay, but people change over the course of 30 years and the South has changed over the course of the last 30 years.

In contrary though, Politico reports:

“…[Sessions] filed several desegregation lawsuits while he was U.S. attorney for the Southern district of Alabama and voted in favor of the extension of the Voting Rights Act in 2006.

Pompeo, a Congressman from Kansas’s 4th District, who was first elected in 2010. Pompeo serves on the Energy and Commerce and House Intelligence committees, and he also served on the House Select Benghazi Committee. Benghazi NEEEDED a voice and the guys on this committee provided that.  Pompeo was a CEO/founder of an aerospace company and an oil field company. He graduated first in his class at West Point.

Ross, who is  79 years old,  is a billionaire and chairman of WL Ross & Co., an investment firm that specializes in corporate restructurings. In short, a very very successful businessman. Anyone that makes a billion dollars knows more than I do. The job here is to create jobs, improve American’s quality of life, and encourage sustainable development, Ross was beyond successful at this in the private sector and I think he’ll serve great in the public sector.

Elaine Chao- 63 years old born in Taiwan and married to Mitch McConnel. She served under President George W. Bush too, as Secretary of Labor. She is also the first Asian-American woman to ever hold a Cabinet-level position. She was the only cabinet member to serve the whole time Bush was president. Lots are arguing that she is part of the swamp that needs to be drained. I really don’t hold an opinion on her. I am no fan at all of McConnel, perhaps this is a way to get Mitch to work with Trump??? We’ll see…..

Tom Price 62 years old from the Atlanta, Georgia. He is in his 5th term as a Congressman and is the chairman of the House Budget Committee. He’s a huge anti Obamacare guy, which makes him a brilliant choice! My family is paying INSANE amounts of money for Health Insurance right now, and it’s painful! Price believes in expanding Health Savings Accounts and allowing tax cuts on purchasing healthcare. He’s also an Orthopedic Surgeon who supported Trump from the start.

One of the most recent picks is 53 year old Steven Mnuchin. Mnuchin is a banker, producer and campaign fundraiser. He is a former partner at Goldman Sachs and a wealthy guy, worth over 40 million. I have heard mixed feelings on this one. Obviously he’ll be a target from the likes of Bernie Sander’s and Elizabeth Warren who are anti Wall Street. If the guy can help get the economy moving again and chip away at the 19 Trillion in debt we face as a nation, I say have at it…..

Trump picked 58 year old billionaire, businesswoman, education activist and philanthropist Betsy DeVos as Secretary of Education, who is from Holland Michigan. She is s huge School Choice advocate! I love that she is a strong supporter of School Choice, however she is close with the Bush family who support Common Core- which I despise! I don’t know her personal views on Common Core and I am sure we will see them unfold as time goes on. Regardless of where she stands, I will continue my opposition to Common Core and its money making test based curriculum.

Flynn who is 58 years old from Rhode Island is a lifelong Democrat. He is a retired Lieutenant General after serving 33 year in the Army. Flynn is also the former head of the Defense Intelligence Agency. His service also included being the commander of the Joint Functional Component Command for Intelligence, Surveillance and Reconnaissance, chair of the Military Intelligence Board, Assistant Director of National Intelligence, and the senior intelligence officer for the Joint Special Operations Command. Lots of Intelligence 😉 but also a ton of experience. I think Flynn is a great pick, he was also considered as Trump’s VP pick for a while but Trump went with Pence-which was the right move.

So there you have it…..now, who’s going to be Secretary of State is the BIG pending question at the moment….