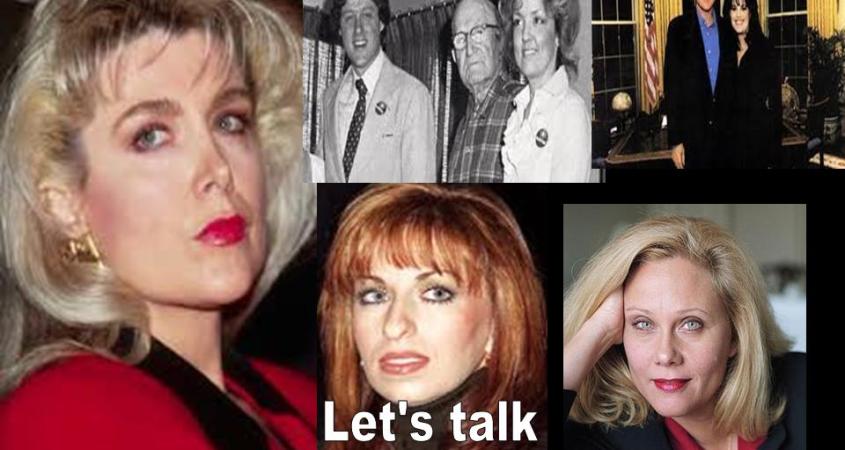 Okay, so Mark Cuban knowingly or unknowingly is backing Globalist Hillary Clinton in the coming Presidential Election. I genuinely have always liked Cuban, but to back a Globalist? Whaaaa? I mean come on Mark- war mongering, crony capitalism, big bank backing Hillary is really your pick? So, not a fan of Mark anymore, bye Shark Tank!

Mark and the Hillary camp thought they were being “oh so clever” when they decided to invite Cuban to the 1st Presidential Debate this Monday the 26th. The idea was to sit Cuban in the front row to really psyche Trump out. The Trump camp, clearly amused, responded by saying….Huh, well maybe we’ll invite Gennifer Flowers to sit in the front row at the debate too. Well, later this afternoon Gennifer Flowers excepted, and will be attending the debate.

So, who the heck is Gennifer Flowers?

For every millennial out there, who is too young to really remember-Flowers was President Bill Clinton’s mistress for over 12 years. Yep, “mistress” the woman Bill slept around with while married to Hillary. Classy right. What’s even classier is Bill denied all this UNDER OATH (sound familiar) until tapes were produced of him dirty talking Gennifer.

Ok, big deal Bill Clinton had an affair-who cares! A guy that wants to be “First Gentleman” of the United States, liked the ladies….and well allegedly assaulted them too. Yep, the guy has alleged RAPE allegations on him! Rape, people-forced unconsentutial sex! That’s terrifying!

Now let’s also not forget Monica Lewinsky. ” Monica who,” you might ask?

[Lewinsky is a “former White House intern with whom President Bill Clinton admitted to having had what he called an “inappropriate relationship” while she worked at the White House in 1995 and 1996. The affair and its repercussions, which included Clinton’s impeachment, became known as the Lewinsky scandal.” more click here.]

Yes, and the guy that wants to be First Gentleman of the United States denied this too, but then there was the dress Monica wore that has Bill’s “stuff” on it, that just blew the cover. (Yes, I seriously can’t believe I had to type that).

So what….no big deal. The “wanting to be First Gentleman of the United States” is a sleazeball that liked to sleep around. Supposedly Bill STILL likes to, according to Colin Powell’s recently leaked email he is quoted saying: (Bill) is “still dicking bimbos at home.” Nice…..just what we want, an alleged rapist still screwing around on his wife. Awesome.

On November 23, 2015 Hillary, while campaigning for President, tweeted out: “Every survivor of sexual assault deserves to be heard, believed, and supported.” Huh, Hillary didn’t think that way in the 1990’s folks, nope….she went after every single woman that accused slick Willy (Bill Clinton’s nick-name, gross right) of sexual misconduct and let these women have it! She had a private investigator dig up dirt on them and according to the investigator she is quoted saying: “I want you to get rid of these bitches he’s seeing, I want you to give me the names and addresses and phone numbers and we can get this under control.” Huh….what does “under control” mean Hillary? Many of these women’s lives were ruined folks, totally humiliated! Instead of standing up to a guy that can’t keep it in his pants, Hillary enabled the behavior! Hillary is reported saying “Who is going to find out? These women are trash. Nobody’s going to believe them.” It’s also reported Hillary called these women —who were allegedly raped “whores” and “sluts” ……wow, so it’s the women’s fault? That’s Feminist Hillary for ya! 😉

I am really looking forward to Hillary talking about women’s rights!

So, when you sit down to watch the debate on Monday night, you will probably see Gennifer Flowers and Mark Cuban. Cuban represents total naivety, Flowers represents a dark past, and more lies and deception of the Clinton’s cover ups.

One thought on “Yes, Let’s talk about Gennifer Flowers- shall we….”