After watching the video of Hillary passing out repeatedly over the weekend, which is seriously concerning, I like Trump-wish Hillary a speedy recovery. I will not however forget what she called me and millions of others over the weekend: Deplorable.

“We need a President who is fighting for all Americans, not one who writes off nearly half the country.” -Barack Obama. These words were tweeted out by Obama in 2012, as a slam at Romney’s comment referring to the 47% of Americans that depend on govt assistance. Donald Trump decided to retweet Barack’s tweet, which I love.

On Friday Hillary stood before some wealthy donors and said this:  “You could put half of Trump’s supporters into what I call the ‘Basket of Deplorables.’” “The racists, sexists, homophobic, xenophobic, islamophobic, you name it.”

She basically called roughly 25 million people she “hopes” to represent garbage. What’s scary is this is how the Jewish people were depicted in the 1940’s in Germany, ending  in a Holocaust of an entire race!

First off, this isn’t true. We are not any of the things Hillary rattled off. We are hardworking Americans wanting unity! This hate speech takes America down an even darker path. We are a divided country right now folks, whether you want to take your head out of the sand and notice or not. An article today by Politco was headlined: 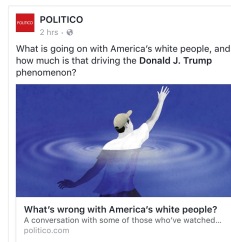 Can you seriously imagine another race being inserted in this title? This headline is RACIST and divisive, and it’s totally okay for an editor to approve this in today’s America! Unreal!

We HAVE to stop this divisive behavior! Hillary would continue this isolating harmful rhetoric. Trump is reaching out to ALL sides. Meeting with leaders that usually always vote Democrat, but he doesn’t care-he wants to unify this broken country. You don’t see Hillary extending and olive branch to the far right….no, she thinks these individuals are garbage.

Time to unify, time to stop electing people that won’t reach out to ALL AMERICANS.