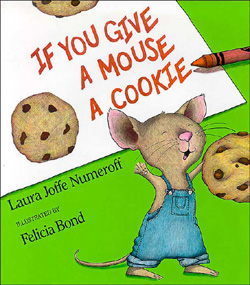 I grew up having this book read to me, it’s called: “If you give a mouse a cookie.”  It’s a great book-I recommend it to your little ones if you have little ones 🙂 The gist of the book is about this little boy who gives a mouse a cookie. Well, because the little boy gave the mouse a cookie the mouse now wants milk, then the mouse wants a straw, then he wants a napkin, then he looks in the mirror and notices his hair is a little long, he now wants a hair cut……and so on and so on….I think you get the idea….

I thought of this book today because I am noticing a trend….call it “trendy” if you will, it’s the trend of negotiating with terrorists.

It has been our policy as a country to never negotiate with terrorist. Obviously under our current administration this policy has crumbled. This was seen in the case of Bowe Bergdahl. The United States traded 5 Taliban Commanders for Bergdahl back in early June of last year. Which is interesting because just today the White House is now saying the Taliban is not a terrorist organization………… I actually kinda chuckled when I read that……so….. then what are they?  And what were these guys doing prior to being held at Guantanamo? Maybe they were Pro-lifers, or Tea Party activists….because that’s what’s being considered terrorism these days….shhheeeeesh!

At first everyone was elated when Bergdahl was traded ….I mean we got an American back-yes!!!  And yes we went against our protocol of “not negotiating with terrorist” but whatever right! Oh but wait…..congress was also supposed to be given a 30 heads up on anyone being released from GITMO, but our President uses Executive Order whenever he damn well wants so ya…..now we have 5 “peacemakers” or Taliban Commanders released and at it again-depending on which side of the aisle your on. Oh, but, the latest development is that Bergdahl is now being tried for desertion. Ooooooh ya…..that’s….that’s not good. But what is really not good is it is reported that 6 soldiers died on missions trying to find Bergdahl. Can you imagine if that was your kid? If you lost your child while they were out trying to find a guy that deserted?

Here is my point, We are now negotiating with bad dudes. Because of this negotiating that is now taking place, every American now has a price tag on their head…$$$$.