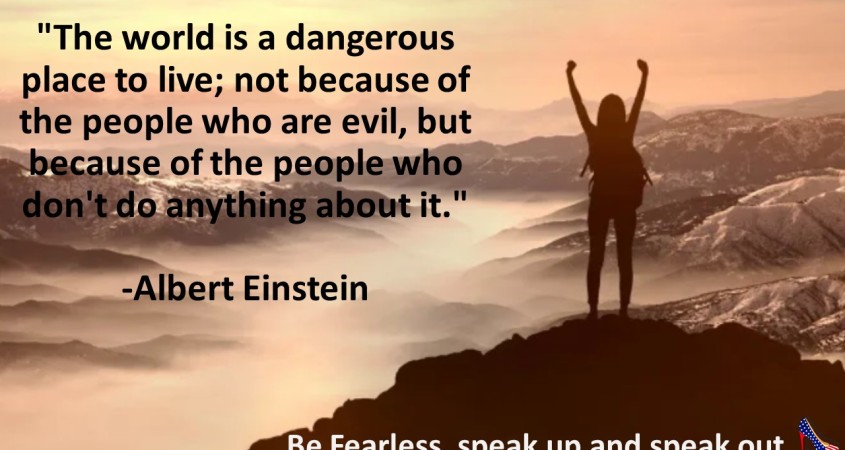 It’s easy to look at the world and just feel like we are losing the battle. Socialism at our door step, confusing children with gender identity at young ages, an attack on our First Amendment, an attack on our Second Amendment, leaving babies to die that survive abortion, terrifying our youth by telling them the world is ending in twelve years, school shootings, a total removal of God from pretty much everything…… it can make you feel like there’s no hope. But, I want to tell you there is hope.
Last night I attended my local county’s school board meeting. I had a zillion things I needed to get done as mom, but the Board was deciding some very important things and I knew emailing them wasn’t enough. I had to speak up, I had to speak out. Believe it or not, I get nervous to speak- but I believe God wants us to push through our fears. To not be silent. So I pushed through the fear and I went.
I spoke, and others spoke- hoping that the predominantly liberal board would hear us out. Hoping that perhaps we might move the needle a little bit.
As I left the meeting, I was stopped by a man. He said “I agree with you, thank you for speaking up.” He looked so familiar. I glanced down at his shirt and there was a picture of his son. I knew this face- it was Kendrick Castillo, the young man who gave his life to defend his classmates in the STEM school shooting last Spring. Tears swelled into my eyes, I couldn’t talk -which is rare, all I could do is pull him in for a hug and say “thank you. Thank you for raising an incredible son.”
I went to bed last night not knowing how the board would vote. I do know that I did the right thing though. I could have stayed home. I could have gotten all the things I needed to get done done, but I chose to speak up.
As I got up this morning and rushed around the house getting kids ready for school, my husband sent me a text. The text stated that the School Board ruled in our favor! I was shocked, because honestly I thought we had little chance of victory.
A battle won. It may be small, but it’s a win.
Do I think we got a win because people showed up and spoke up- yes I do.
I truly believe that we can no longer be silent. That we can no longer go about our “day to day” too busy to get involved, too busy to speak up and speak out.
The opposition wins because no one is standing up to them. They win because we are all too often too busy and too silent. We allow the minority to rule the majority.
Enough.
Kendrick Castillo gave his LIFE, the very least WE can do is give our VOICE.

Hope comes when YOU and ME speak up and speak out!

Many write off the millennial vote. Many think that people ages 18-35 are simply uninformed or oblivious to our every day realities. The video below proves this not to be true AT ALL! Meet 23 year old Luke, a Colorado carpenter and small business owner. Bailey, a 22 year old cosmetologist and Owner of a spa and salon. Oscar, a 20 year old  Welder, and Aaron, a 19 year old Undecided voter.

All four of these millennials are highly educated on the issues at hand. They are not emotionally casting their vote, but instead voting on policy and the key issues at play in this election.

As these young people discuss their concerns, through a thought provoking dialogue, we witness Aaron, who was undecided, begins to lean towards Trump in his decision making process. Watch and Share with the millennials in your life, they could be the deciding factor in this election and determine the course of our country for the next 40 years. 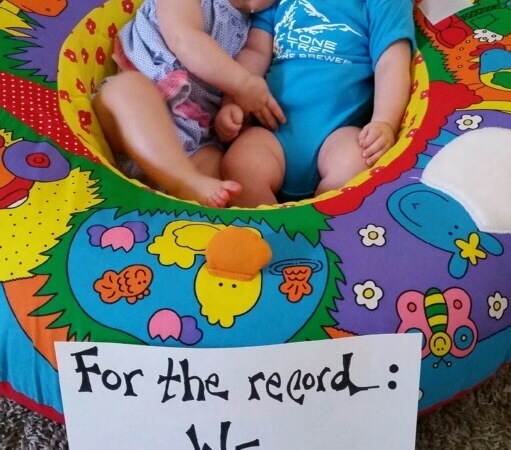 Well, if you follow politics at all, you most likely saw the picture over the weekend of Donald Trump holding two babies. Well, the little girl in the photo is mine and the little boy is my sister’s. At this point it’s totally viral:

I was thrilled to see Trump, and if you’ve followed this blog, you know I totally support him. I have been amused watching which media outlets use which pictures. Of course liberal and main stream sources are using the pictures of the babies crying. To set the record straight, they were not crying when Mr. Trump picked up our children with such natural grandfatherly care: 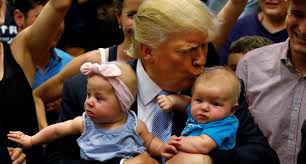 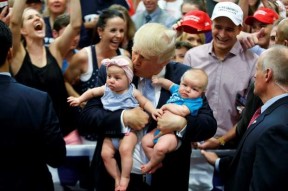 It was when the crowd cheered with excitement that they got scared and naturally wanted their momma’s. Totally normal people. Trump does not make babies cry. Apparently now, your every day average American citizens have to come forward to set the record straight….because by God, the Main Stream Media won’t do it.

After hearing that the Colorado woman (who murdered the baby that was still in the mother’s womb) was not being charged with murder -I was greatly disheartened, deeply disappointed and grieved. Being a momma who has carried two babies in my womb-I was heartbroken over this story. I have rejoiced the moment I found out I was pregnant on both accounts and immediately began daydreaming of the day I would meet the little life growing inside of me. To not recognize a person, when it IS a person baffles me. There are many in this world that would not be able to survive without intense care from another individual, but they are considered a life….but because this baby did not take a breath before losing life-this horrific pre-calculated act, was not considered murder.

It’s stories like this that leave me thinking….has it just gotten too dark? Is the world past the point of saving? Where is the good?

I was raised by two parents that told me daily to make a difference in this world. It was not a request, it was an expectation. I was taught that I am here for a reason. I have a purpose. This life is not merely to be lived casually and then poof….it’s over! What message am I leaving behind? How am I influencing the world around me?

Am I making a difference? Am I having an impact?

I have a sister in law that has spent every Saturday morning for years and years outside an abortion clinic-talking to women considering abortion. Every Saturday! Every single Saturday for years, she was out there-explaining to women that they had other options and that the life inside of them deserved a chance. Upon hearing this story years ago, it was easy for me to think…wow, that’s dedication….that’s perseverance….I hope she is having an impact…..

We live in an instantaneous world. We want to see results quick! We want to know outcome fast! We desire instant gratification. But this…..this…..takes perseverance, this takes dedication.

That abortion clinic is now shutting down.

I heard a sermon last week and the message was on perseverance and seeing the PEOPLE in the Cause. I believe my sister in-law saw the PEOPLE in the cause. She saw the mother who had no hope, and she saw the baby-the life that many choose to not see. It’s easy to get wrapped up in the CAUSE. To get caught up in the task. Tasks like saving the homeless, the starving, the aborted babies, the abused  and in my case…….the cause to preserve individual liberty for the unborn and born…one of the core beliefs on which our country was founded.

But you see, the ’cause’ will burn you out. It’ll deplete you….it will run you dry to the point at which you have nothing left to give. But my sister in-law didn’t burn out….she stayed at it…..because it wasn’t a “cause” to her, it was her heart. She allowed her heart to see the humanity in the cause. When this happens, there’s no burning out….there no running out of steam, and there’s no need for instant gratification or even acknowledgment. There’s no quick demand for results. I believe it’s when we see the humanity, our hearts are moved and love allows us to endure the race…..the marathon and to fight the good fight.

I saw this video below that is actually a promotional video for a conference, but the message is profound:

I encourage you to SEE the humanity in whatever it is you are fighting for, it is when we do this….there’s no giving up, or giving in….the only option is to press on forward and keep swinging.