I woke up this morning and read that billionaire and accused pedophile Jeffery Epstein killed himself in his prison cell in Manhattan last night. Epstein was being held there without bail awaiting trial on child sex trafficking charges.

I honestly thought this was fake news. Some form of perverted satire.

Epstein had been placed on suicide watch, since being found two weeks ago slumped over in his jail cell from neck injuries.

Epstein’s death was from hanging himself officials have said.

Court documents accused Epstein of bringing at least 40 underage girls to his mansion in New York for sexual encounters, and he would have faced at least 45 years in prison if found guilty.

Many powerful people participated along with Epstein in these heinous acts of abuse towards children; they did not want Epstein to name names. They did not want the victims of these horrible acts to have their justice.

Many think they just got away with their evil acts. Maybe for a moment, but there is no such thing as a secret. God sees all of this….. justice will prevail, eternal separation from God is the worst punishment of them all.

If you are not a conspiracy theory person though, you might be one now…..

Robert Mueller’s Special Counsel is now investigating “The Podesta Group.” Which is owned by Tony Podesta-who is the brother of John Podesta (who was Hillary Clinton’s Campaign Manager Adviser, close confidant etc). This investigation has morphed into a criminal inquiry on whether or not the Podesta Group, which lobbied on behalf of the Ukrainian Government, violated the Foreign Agents Registration Act.

Ukraine hired The Podesta Group to essentially promote their image. A detailed disclosure of all spending was supposed to be filed with the Justice Department and this didn’t happen until the the Press released this violation.

This is the same thing Paul Manafort was accused of: violating “the Foreign Agents Registration Act,” only Manafort wasn’t even Trump Campaign Manager when this happened. Remember when the Feds raided Manafort’s home in the middle of the night and it was all drama all over the news—because “Russia Russia Russia.” Well, The Podesta Group did the same thing and they were actually TIED to the Clinton Campaign during the campaign cycle.

Anyways…..I to be completely honest…..I think this is all a big distraction. It’s a way for Mueller to appear to be looking at “all” sides of foreign ties to the election….but like Frederica Wilson, it’s another shiny object to distract from the REAL STORY. Yes, The Podesta group screwed up, but they are not the story.

The breaking story of all stories, is one that Robert Mueller is directly tied to! Mueller turned his head (while he was head of the FBI) when it was known that Russian Officials were bribing, money laundering and offering kickbacks to U.S. Government Officials in order to get a hold of OUR Uranium (20% to be exact). The FBI was investigating this and should have IMMEDIATELY worked with the Justice Department (which also turned it’s head-AG Holder) in pressing charges — but instead the investigation was prolonged for YEARS. During this time the Obama Administration made deals with the Russians and The Clinton Foundation walked with 145 milliondollars from the Russians after the Russians took over 20% of our Uranium. THIS. IS. TREASON.

Don’t be distracted by Hollywood, flashy rhinestone cowboy hats, or even the Podesta Firm, stay focused. Below is a breakdown of the REAL STORY that so many are trying to distract you from! 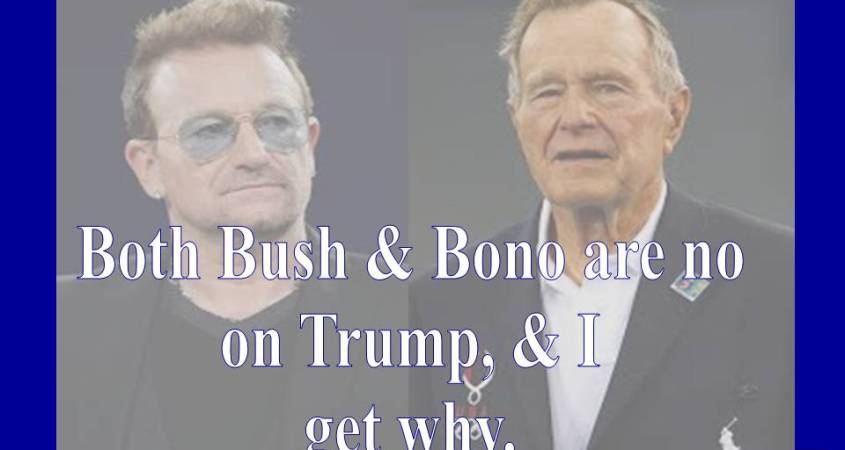 In the last 24 hours two people that are known around the world both came out against Trump. George H.W. Bush said he’d vote for Clinton, and Bono stated that:”Donald Trump is potentially the worst idea that ever happened to America. Potentially.”

Now one could argue that Bush is upset that his son Jeb didn’t get the nominee, and that Bono is just a disconnected celebrity, but I think it goes deeper than this.

George H.W Bush was one of the founding members of the Trilateral Commission . The end goal of this commission is Globalism and a New World Order. Now don’t go freaking out on me, this is not Conspiracy, this is factual information. The desire to create an interdependence among nations so much so that globalism is enacted and a New World Order established. Bush even talks about it in this speech here:

Bush and Bill Clinton both were members of the Trilateral Commission and have always been strong supporters of Globalism. I wrote this blog a while back detailing the close connection both the Clinton’s and the Bush’s have with ushering in globalism, click here to read. So to be honest I wasn’t at all surprised that George H.W Bush was backing Hillary Clinton, it was to be expected, they are on the SAME team!

So, now for Bono. To be honest it hurt a little when I read this morning that Bono thinks Trump is no good. I honestly love U2’s music and I have been a fan of Bono since I was a kid, and I am not really a “fan” of anything ever. Bono believes that Trump is trying to “hi-jack” an idea. The idea of “justice and equality for all,” Bono stated.

Bono has profited greatly off of the American Dream. Bono though, is not an American. He is Irish. Love the Irish, I am married to one of Irish descent. Bono does not understand that we Americans have had to apologize over the last eight years for being American’s. Obama has divided this country more than any President before us. The tension can literally be cut with a knife. Justice and Equality in today’s America is based on emotion and not logic and this needs to be remedied.

To Bono, I say reconsider your news sources seriously, and to Bush -I am not surprised.