It was almost a month ago since the 2018 Midterm Elections. I am a firm believer that if you want to improve, you have to ask yourself “what went wrong?” My state -Colorado, went totally blue. Solid. Blue. I worked HARD on this last midterm election. I am sure if you are reading this -you did too! On a national level we watched the Democrats take back the House and we are now looking at a Speaker of the House Nancy Pelosi. If you thought the last two years were an all out attack on the Trump Administration, buckle up!

In Colorado, we are now outnumbered by Unaffiliated voters and Democrats. In order to win, you have to get the Unaffiliated vote. The other night I attended a meeting discussing this last midterm and I was amazed at the work that went on behind the scenes by Democrats. They DO NOT STOP. They are already campaigning for 2020. They are combing neighborhoods as I write this, building relationships and gaining people’s trust. I learned that throughout the year, Democrats drop “welcome to the neighborhood” gift baskets off to families that are new to the neighborhood in hotly contested districts. They pick up ballots and drop them off for voters before election day. They NEVER STOP. If they don’t stop, WE CAN’T STOP EITHER! If you aren’t aware, I’ll let you know -they are coming for your City Councils. They are coming for your School Boards, they are strategically, skillfully in play and if we don’t WAKE UP, we will LOSE BIG in 2020!

Dropping off mailers and making phone calls isn’t cutting it! It’s time to let the consulting firms that face no consequences for losing elections and have a monopoly on funding know that their shtick is over!

I know you don’t want to hear this, but it’s the truth. It’s our reality and it’s time to deal with it!

Ground game. We need a ground game just as good if not better than the Democrats. Contracting 20′ somethings ninety days out before an election to knock doors IS NOT GETTING THE JOB DONE.

Relationship. You have to build a relationship. Beef up your precinct leader (s) requirements, and District Captains -get them in the field at least Once every Quarter! This is time invested not wasted. Whoever gets more answered door knocks -WINS. Yes, make it fun and with fun comes prizes! Connect with Conservative Colleges and Universities, Christian High School Civics classes and have them blanket neighborhoods often too. Utilize technology by incorporating apps in your ground game operation, and also Text! Unaffiliated Voters  should be hearing from us frequently, not just during campaign season. It is all in the hustle! We have lost the hustle -it’s time to get it back!

What is a hustle without a message though? We have to ask, “what is our message?” I read an awesome piece by Andy Peth who is the founder of The Party of Choice,  the piece is called: “Enough! Republicans must become the party of choice” -read it here.  Peth articulately lays out how we (Republicans) REALLY are the Party of Choice. Democrats are the Party of CONTROL. On every issue we support Choice as long as one person’s choice doesn’t take away another persons choice. Democrats want to Control and regulate EVERYTHING! What car you drive, what you eat, where your kids go to school, how you protect and defend yourself….I could keep going but you get the idea. Who wants to be told what to do and controlled by a bunch of out of touch bureaucrats in D.C.? (To understand how to argue specific conservative issues, please check out the article).

Lastly, we hear it all the time “facts don’t care about feelings,” but I am going to have to disagree when it comes to communicating with Unaffiliated voters and Democrats, it’s “feelings don’t care about facts.” In communication you have to speak the same language in order to truly convey the right message. Unaffiliated voters and Democrats, are FEELERS.  I could state fact after fact with them until I am blue in the face, but they are moved by emotion. That’s why the pop culture world is sooooooo influential. It’s feelings! If you know me at all, you know I use comedy to convey a vast majority of my messages. Comedy opens the door. It invokes feeling. If you want someone to listen to you, use comedy but if you want someone to vote for you, make them cry. Martin Luther King Jr. didn’t say “I have facts,” he said “I have a Dream.” It’s in the dream. The Dream is a belief in something greater than yourself. Conservatives are obsessed with the Individual, I am one of those Conservatives. “Individual Rights,” “Individual Liberty,” it’s our mantra! In order to influence though, it can’t be about you. It must be bigger than you. You want to move people? Give them something to BELIEVE in. What do we believe in? CHOICE. It’s been about Choice since the beginning of time. Our ability to choose is being eroded by a Globalist agenda, and if that agenda succeeds, the Individual Liberty that we so valiantly defend disappears. We have to use emotion to convey the importance of choice to Unaffiliated voters and Democrats and then implement facts. It can be done, it must be done -if not we’ll keep losing. 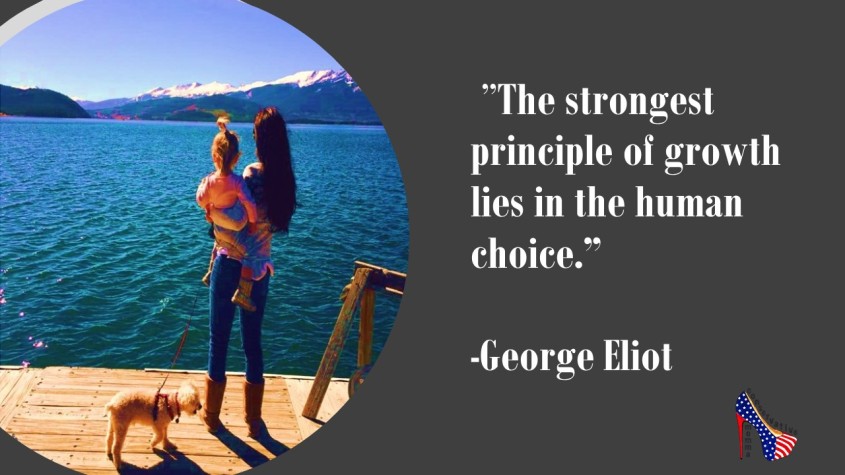