Today, Director of the FBI James Comey announced they were reopening the investigation on Hillary’s Email Server. This major major major October surprise was sent as a letter to Congress:

“In connection with an unrelated case, the FBI has learned of the existence of emails that appear to be pertinent to the investigation. I am writing to inform you that the investigative team briefed me on this yesterday, and I agree that the FBI should take appropriate investigative steps designed to allow investigators to review these emails to determine whether they contain classified information, as well as to assess their importance to our investigation.”

Just minutes ago we discovered that the “unrelated case” was the investigation of Anthony Weiner’s sexting case. The FBI has seized electronic devices belonging to Anthony Weiner and Huma Abedin, Hillary’s top aide, who is the ex-wife of Weiner.

What is the MOST IRONIC is that after Huma Abedin announced she was separating from Anthony Weiner, Trump released this statement: 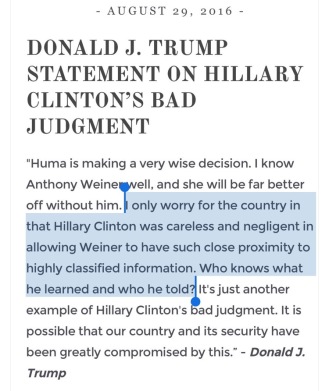 Trump was spot on with all of this –to so carelessly and recklessly allow for classified information to be compromised is completely uncalled for and makes one totally disqualified for President!

The fact that Dir. Comey reopened a case 11 days before the Presidential Election means that the information discovered is so damning that to withhold it, could land him in jail and anyone else covering the case! Which leads me to think if Hillary were to be elected, her entire first year as President would be spent testifying before Congress and once again under investigation. This essentially would lead to an impeachment, because there’s no way Comey would reopen this investigation if it wasn’t clear that classified information was on Hillary’s server and was quite possibly compromised. Let’s remember-Hillary before Congress and UNDER OATH, said no classified information was sent or recieved:

“There was nothing marked classified on my emails, either sent or received. And I want to respond ….”

Jordan interjected, “You use the right term there – use ‘marked.’ That’s the one – that’s what you – you used the revised statement there.”

Clinton continued, “Well, but that’s, well, congressman, there was a lot of confusion because many, many Americans have no idea how the classification process works. And therefore I wanted to make it clear that there is a system within our government, certainly within the State Department, where material that is thought to be classified is marked such, so that people have the opportunity to know how they are supposed to be handling those materials. And that’s why it became clearer, I believe, to say that nothing was marked classified at the time I sent or received it.”

Let’s remember folks that Martha Stewart went to jail ….JAIL for lying under OATH, and NO classified information was involved in her case, neither was the compromising of AMERICAN LIVES-if confidential info was sent.

Hillary has also stated she doesn’t know what “C” stood for, to cover herself if she were to lie.  Yet in 2010 Hillary lectures on Cyber Security and not using personal emails or personal servers. Do as I say, not as I do:

I have family that has access to classified information. If they send an email from their “work” it is always marked unclassified as a disclaimer at the bottom of the email! This is OBVIOUS information to any Civilian -so if you have ANY clearance You know when you are dealing with CLASSIFIED information! This IS A BIG DEAL. If classified information can be found by an enemy of the United States that puts my little family and every American out there in grave danger!

Also Wikileak’s has just noted that they will be dropping a bombshell on all this tomorrow. Perhaps Comey realized all this FBI cover up will be exposed if he doesn’t do something quick! Let’s watch this thing play out, I will update this blog as info comes in.