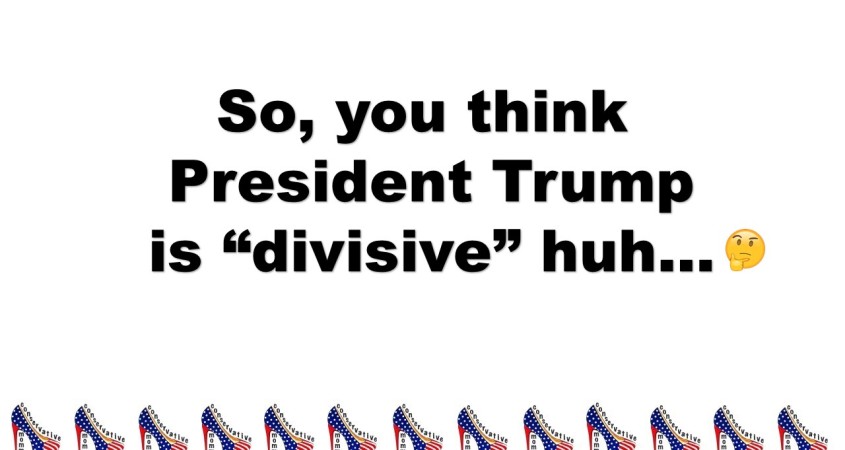 I was just on a friends Facebook page and she was getting a ton of heat for posting a Pro-Trump post. As I read the comments, I kept reading the repetitive comment that Trump is “divisive.”  These comments directed at her were angry and totally intolerant of her own political and personal beliefs. I sat there, wanting to respond to these people who were just regurgitating talking points fed to them by the mainstream media, but then I felt inspired to write this blog post instead.
So you think Trump is divisive huh?
“Divisive” as if this is a bad thing…..
Jesus was divisive, FYI that’s why they killed him.
Martin Luther King Jr was divisive.
Abraham Lincoln was divisive.
Gandhi was divisive.
George Washington was divisive.
Winston Churchill was divisive.
John F. Kennedy was divisive.
Ronald Reagan was divisive……
When you stand firm in a belief,  people are going to disagree with you, this causes division.
Policies and Issues cause one to reflect and ask the question “what do I stand for?”
I believe that killing babies in the womb is immoral. I believe that voting for individuals that push for abortion and infanticide goes directly against my beliefs. Your vote is your voice. It is with your vote you condone polices implemented by legislators.
I don’t vote for politicians because they sang karaoke with Jimmy Kimmel, or performed in a Saturday Night Live sketch. I don’t vote on personality, I vote on policy.
Too many are emotionally lead. They read headlines, see a heart wrenching picture on the cover of yahoo or watch late night TV, and know very little of the policy behind the countless issues we face.
So here are a few of the Trump polices front and center. I challenge those reading to LOOK at the policy and ask yourself “where do I stand?” When you take a stand, you get heat, but it also signifies you have a backbone.
-Protecting our borders? Yes or No?
-Protecting life in the womb? Yes or No?
-Not Allowing Countries to walk with billions while America loses billions in Trade.
Yes or No?
-Refusing to coerce people into dependency on government support, but instead cheering for job growth and real independence. Yes or No? (Over 3.9 Million Americans lifted off of food stamps by the way under President Trump 👍)
-Condemning infanticide & those who support it-like the Democrat Gov. of VA. & other Democrats. Yes or No?
-Believe that parents should have a say on their child’s education? Yes or No?
-Supporting whistle blowers in the VA. Yes or No?
-Supporting American sovereignty? Yes or No?
-4 Million jobs have been created since 2016 Election Day. Do you support this? Yes or No?
-More Americans are employed now than ever before, do you support- yes or no?
-Unemployment is at a 49 year low. Good or Bad? Yes or No?
-Women’s unemployment is at a 65 year low. Do you support? Yes or No?
-Right to try legislation passed. Do you support? Yes or No?
-Black and Hispanic unemployment is the lowest it’s been in History. A good thing or Bad thing? Do you support yes or no?
-The U.S. Embassy being moved to Israel’s capital city Jerusalem. Do you support? Yes or No?
-The First Step Act was signed into law, giving formerly incarcerated individuals a second chance. Do you support this? 👍👎
-A President that puts the country he represents as his top priority and does not apologize for it. Good or Bad? Yes or No?
– Youth unemployment has hit the lowest rate in nearly half a century. Good or Bad?
-Cutting Taxes or Raising Taxes, yes or no? (Before you vote for this please Google “Government waste,”  then ask yourself if giving more money to a government that spends 25 Billion yearly on vacant government buildings is spending your money wisely?)
-Is ending a Deal with a country that chants “death to America” and burns our flag a good thing or a bad thing? Yes or No?
-Protecting Americans from countries that harbor terrorists that want to destroy America? Yes or No?
-Reducing high-dose opioid prescriptions drugs by 16% to combat the opioid crisis in America, good or bad? Yes or No?
These are just some of the policies I support, and these polices have been implemented by President Trump.
I SIDE WITH these polices.  So if these are not things you side with, I get your anger towards Trump polices and why you would shout “divisive divisive divisive.” But like I said, divisive isn’t a bad thing, it actually means you stand for something.
Policies cause Division. Division causes reflection and forces the individual to choose what policies they side with….and what they truly BELIEVE in. 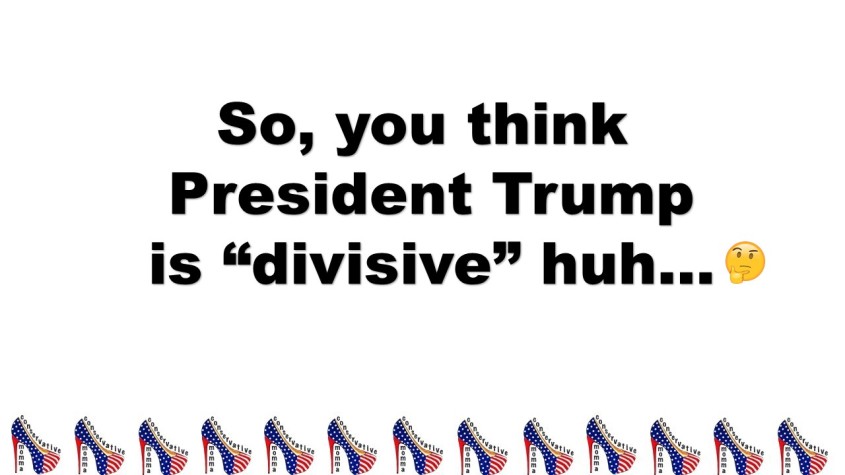