While Florida’s Disney World shuts down over the Corona Virus, former Florida Democrat Governor Candidate Andrew Gillum (according to police reports), was involved in an “alleged” Crystal Meth Sex Incident early this morning.

According to the documents, police responded to a cardiac-arrest distress call just before 1 a.m. at the Mondrian South Beach. When two officers from the Miami Beach Police Department arrived at the luxe hotel on West Avenue just north of 11th Street, they noted that Miami Beach Fire-Rescue was on scene treating a man for a possible drug overdose, but that the man, identified as Travis Dyson, was in stable condition.

The officers stated that the third man involved in the incident, Aldo Mejias, had lent Dyson his credit-card information to rent a hotel room yesterday afternoon and that the two were supposed to meet later that day. Mejias told the officers that he arrived at the hotel room around 11 p.m. and that Dyson opened the door and then immediately collapsed on a bed and began vomiting. Mejias said he began giving Dyson CPR and called 911.

Mejias told police Gillum was inside the hotel room “under the influence of an unknown substance.” Mejias said that while he was performing CPR on Dyson, Gillum was vomiting in a bathroom. Officers said that they tried to speak with Gillum but that he was “unable to communicate due to his inebriated state.”

Miami Beach Fire-Rescue said it responded to the hotel a second time for a “welfare check” on Gillum, at which time he was in a stable condition.

The officers said they found three small baggies of “suspected crystal meth” on “both the bed and floor of the hotel room.” Officers said Gillum left the hotel room “without incident” that night and went home.

Gillum in a response put out this statement:

“I was in Miami last night for a wedding celebration when first responders were called to assist one of my friends,” Gillum said in the statement. “While I had too much to drink, I want to be clear that I have never used methamphetamines. I apologize to the people of Florida for the distraction this has caused our movement.

“I’m thankful to the incredible Miami Beach EMS team for their efforts. I will spend the next few weeks with my family and appreciate privacy during this time.”

You dodged a bullet with this one Florida 🤦‍♀️. 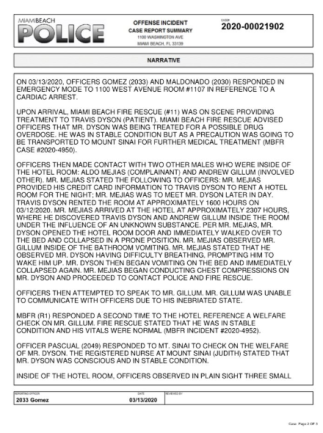 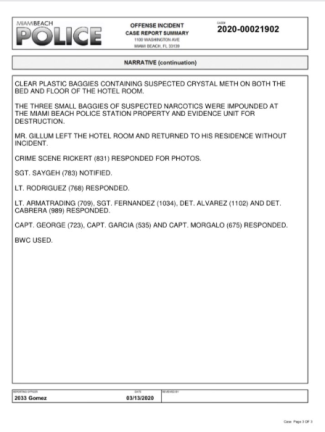