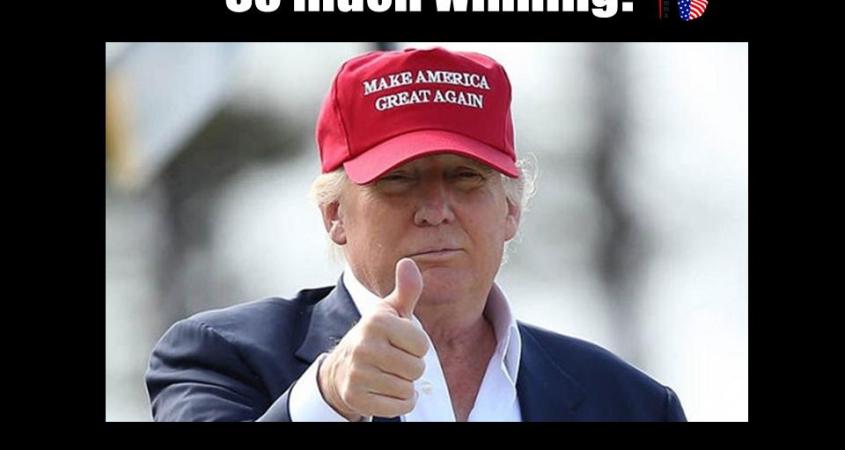 I am not sick nor tired of winning yet!
Here is my list of my favorite accomplishments and impacts of Trump’s First year as President…..enjoy…..and share!
1) Gorsuch to the Supreme Court.
2) Slashing in overbearing government regulation.
3) Getting rid of the Transpacific Trade Agreement.
4) Enforcing current Immigration Law…..I know,,,,a lot of these are common sense.
5) Vice President Pence was the First Vice President to Speak for the unborn at March for Life in D.C.
5) Rebuilding our U.S. military.
6) President Trump said he would not take a salary while on the campaign trail, and he’s keeping that promise! That goes beyond true Service!
7) Keeping people from countries that want to kill us and harbor terror out of our country. I know….I know…too much logic…..
8) Mexico City Policy restores: Defunding international Planned Parenthoods.
9) Ridding government positions that do nothing, thus saving us all $$!
10) Supporting our men and women in blue, through Executive Orders to combat international crime organizations, anti-law enforcement sentiment, reducing crime on illegal drugs.
11) Reversing Obama’s bathroom Exec order….so boys will now go in boys restrooms & girls will go in girls restrooms while in school because this is SANITY!
12) Not sure if you noticed but Nikki Haley is kicking ass in the UN!
13) Home builder confidence is at a twelve year high!
14) Consumer Confidence is at a 17 year High!
15) Record Breaking stock market!
16) Identifying & eliminating Government Waste, saving YOU money!
17) Now auditing the Executive Branch of government, saving you money!
18) Illegal Border Crossing is down 40%!
19) Off shore Drilling is now taking place so we CAN be more energy Independent.
20) Trade with China is now being better negotiated.
21) Trump Said No to Paris Agreement because other countries refused to play fair.
22) Executive order to stop funding “Sanctuary Cities” you know…..the cities that refuse to comply with U.S. immigration law.
23) General Mattis is kicking ISIS’s ass!
24) We are Greatly improving the VA, thank you-Dr Shulkin.
25) “Whistleblower Protection Act” was signed: those that see a wrong doing in the VA encouraged to speak up and will be protected!
26) Betsy DeVos at the Department of Education is returning power back to the states! Where it should be!
27) Personal Income is on the rise.
28) Housing Sales are on the rise.
29) Black home ownership back on the rise.
30) Renegotiating NAFTA, which means better trade deals!
31) Approval of Keystone & Dakota pipelines.
32) Guys —Our GDP is at 3.2%! Yaaaas!
33) Unemployment is at a 17 year low!
34) Finally Standing up to Rocket-man, you know that North Korean Bully.
35) Well Over ONE and a HALF Million Jobs have been created since Trump took office!
36) Lower Courts are being filled with Conservative Judges!
37) We are Standing with Israel and Moving Embassy to Jerusalem like we said we would in the 90’s!
38) Special Note: 16 people worked for Michelle Obama only 4 work for Melania, this is what it looks like when a businessman is in the Oval Office. This also saves YOU money!
39) Trump refused to certify the Iran Deal because it was HORRIBLE DEAL!
40) Johnson Amendment is no longer a threat. Pastors CAN now speak truth when it comes to politics.
41) Space Exploration is now back in play.
42) JFK files released-which is an excellent display of government transparency.
43) Land confiscated by the Federal Government is being given back to the STATES.
44) Tax Reform Passed  through Congress and SIGNED!!!!!
45) Corporate Tax cut -which allows for job creation & growth!
46) 91% of the Middle Class will now receive tax relief!
47) Horrible Obamacare Mandate rescinded!
48) 285 Million was cut from U.N. budget, because they hate Israel.
49) Empowering women by launching the Council for Advancement of Women Entrepreneurs and Business Leaders.
50.) Executive Order “Buy American Hire American.” Prioritizing American workers and businesses through promotion of “Made in the USA.”
I could keep going,but let’s be real, this blog is getting too long. Let’s also take note that this is just a small list of Trump’s MANY Accomplishments in his first year!
This is what winning looks like, OH……and I am not yet tired of it.
#MAGA

(***If you want to support Conservative Momma vlogs and blogs please consider donating to my Paypal account or becoming a monthly Patron for $1 at Patreon.)