Skip to content
So many thoughts have been running through my mind since mid term elections occurred almost a week ago. I attended our county’s executive committee meeting this past Saturday-many victorious winners were there, high-fives were given, congratulatory praises were sung and even those who came up short had grins on their faces-because “we” won….for the most part.
I spoke with my mother the day of the election….and I was concerned. Why….because I knew that a Republican “win” was not a win for Republicans, it was a vote against our rogue president. The Republican party did not run on it’s platform….because I believe it’s platform has become convoluted and skewed…almost at times hard to decipher from that of the Democrats agenda. This is not a knock against the Republican candidates that unseated so many democrat incumbents, I couldn’t be more proud but WHY they won is up for debate.
After all the hoopla simmered down, the meeting took a different turn than expected. Many in the room who held elected positions expressed their concern for the Libertarian candidates that stole votes. “Don’t they know that voting for a Libertarian is throwing their vote away” I heard many argue! “We wouldn’t have lost State House seats, if it weren’t for the Libertarians” many voiced! The cheer in the room turned to contempt with many looming questions.
I didn’t have questions….I knew why….and I know that the Libertarian movement is only going to grow as our President acts more and more like a King.
Will Libertarians become the new dominating right of center party? No. Could they push for a much greater divide among Conservatives, yes-without a doubt.
I believe in the next two years we are going to witness Executive overreach by our president like nothing before. Shoot, when you have nothing to lose….go all in, right?
Obama has already waved his Executive pen wildly in the face of the American people and he is set to do it again. An additional 1500 troops are being sent to Iraqand Syriato assist against the Islamic State. He is doing this all without congressional approval…which technically makes it illegal. Obama is soon set to declare amnesty for millions of illegal immigrants without congressional approval- not adhering to the voice of the American people-because congress IS our voice.
But here’s the deal….Obama is not the first to push his executive orders on the American people, this has been going on since the beginning of the presidency. I do believe that Obama’s executive orders (those pending and those in play) will have a greater impact on the daily lives of the American people-with much more at stake, which in turn will cause greater division among the American people.
This division is going to have millions throwing their hands in the air, angry that their voice is not being heard! I believe that the actions that our president will take, could quite possibly cause for a revolt.
Why do people vote Libertarian, because they hate what they see in BOTH parties.  What is the Libertarian’s cry? It is a plea for less government intrusion, less government overreach, and definitely LESS EXECUTIVE orders.
If Republicans really want that Libertarian vote….than you have to realize changes must be made. The Establishment must bend its knee to the cry of the people. The emphasis of our Party must be LESS government overreach, IF we want that Libertarian vote.
We have to make our Conservative cause so clear and separate from that of the Democratic Party. There has to be less picking and choosing of when we want Government up in our business and when we don’t.
The two years ahead to 2016, is an uphill battle….but it’s in battle that leaders emerge and it’s in times of uncertainty that innovation is birthed.

My prayer is that we take this opportunity to display our strengths as party and not our likenesses to our opposition. 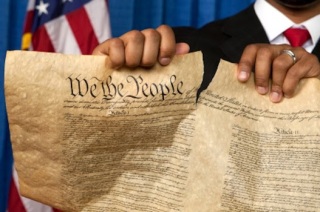