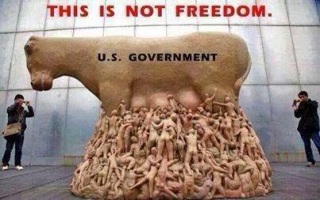 I saw this image last week online. I guess it’s been floating around on the internet for some time but this was the first time I saw it. I haven’t been able to get it out of my head, it is disturbing. I think why it bothers me so much is because it holds such truth. I don’t know who the artist was, but they captured a hard reality.
In the last day, the Senate passed a bill in favor of extending unemployment insurance. It was a controversial bill because the argument is obviously -where the hell are we getting the money to pay for this??? There of course was no budget passed to take from another government expenditure, that would be too logical…our good ol’ Congress just said what the hell…let’s keep writing checks we have no way of actually being able to ever really cash!
Then our POTUS today….who was ecstatic to hear that the American people will continue to rely on the government for their survival, made this statement: “I’ve heard the argument that says extending unemployment insurance will somehow hurt the unemployed because it saps their motivation to get a new job … That really sells the American people short. I meet a lot of people as president of the United States … and I can’t name a time where I met an American who would rather have an unemployment check than the pride of having a job.”
Reeeaaaallllyyy…………..???????? I don’t for one second believe him…
Why don’t I believe him? Because if Obama really “believed” in the American people there would be a s*%t load LESS of government involvement. We wouldn’t need to be “babysat!”
If he really “trusted” the American people, than we would be seeing much more of a Libertarian culture and not the forecast of socialism. What we are witnessing is a complete distrust in the American people and the best way to control that, is to get them on the dole.
Yes, there are some that really do need assistance but the majority do not! But if the government

can begin supporting more and more we will become a society that no longer dreams and is no longer free.